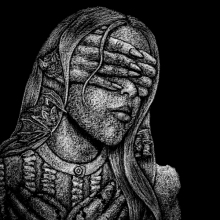 Now we are going to completely shift gears due to the incredible surprise I received yesterday.  What we have here is Cadabra Records’ (in arrangement with Bleak December Inc.) Limited LP presentation of Dracula.  This is a spoken word LP featuring the voice of none other than Hollywood veteran Tony Todd (Candyman, The Crow, Platoon etc.) in a condensed version of the story totaling around 30 minutes.

The album also features a tasteful and at times dramatic musical score written by Brent Holland which adds to and does not distract from the darkness of the atmosphere.

The album starts off with the voice of Mr. Todd which, (for lack of a better reference) is reminiscent of Vincent Price in Michael Jackson’s “Thriller.”  His voice is dominant in much of the recording and basically serves as both character and narrator.

It’s important to note that the production and mixing of the recording is immaculate. The mix includes an extremely effective use of left and right sides and highs and lows which aid in the implied depth of character location.  One can easily envision a cast of characters in separate locations of a scene and easily distinguish each unique voice.  The soundtrack and sound effects supplement the  dimly lit atmosphere as well.  I would surmise that the character of a vinyl LP (perhaps in a surround sound speaker system) would create a near perfect listening experience.

So for those who enjoy the audio experience of the story of Bram Stoker’s Dracula but might be discouraged at the thought of sitting through multiple CDs or cassettes, this is a concise version, perfectly produced and still maintaining a creepy vibe.  Very highly recommended indeed and such a unique piece of work.

This limited edition features an incredible opportunity to own a vinyl LP in either 160 copies on red/black swirl, 40 in “hand-dipped blood splatter,” and 300 on grey margle… only 500 copies total.