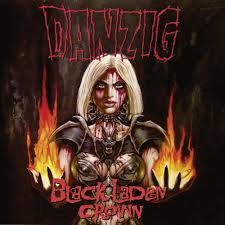 At age 61, Glenn Danzig’s voice is as good as it’s ever been…if not even better.

Black Laden Crown is the new album by Danzig finally given the appropriate respect by the almighty Nuclear Blast.  Danzig is back at his soulful best.

Danzig has managed to go back to trademark sound characteristics despite a number of member changes since the self-titled debut; i.e. the guitar squeal, the beats etc. But unlike the thinness of the debut recording production, the sound now is more layered, fuller and at times heavier.  Perhaps that’s due to the mixing giving the guitars more of a dual-axe sound as opposed to the thinness of Danzig’s self-titled debut.

But if you are looking for the radio-friendly Dazing as in the likes of “Mother” or “Devil’s Plaything,” this may not be quite up your dark alley.  In this case, think How the Gods Kill or maybe Danzig 4.  Black-laden Crown is still in some cases catchy, in some cases bluesy but in all cases Danzig, Period.  Tracks like “Devil on Hwy 9,” “Pull the Sun” and “Last Ride” present a pretty wide variety of styles much in the way we saw with Lucifuge; “Killer Wolf,” “Long Way Back from Hell” etc.

Black-Laden Crown marks Danzig’s first studio release of original material in the past seven years.  The last few Danzig albums have suffered not from quality of material but rather lackluster distribution and promotion.

That’s all about to change now that Danzig has Nuclear Blast on his side.  Danzig is back.  Let’s hope “Last Ride” is just a track on the album and not a plan for retirement.  It appears Danzig has a lot of life left in him and a lot still to offer.