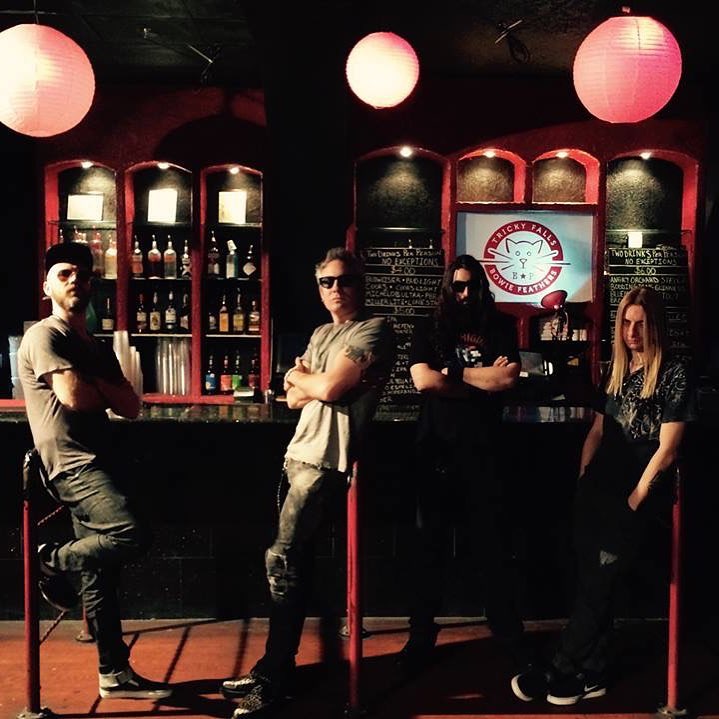 We had the honor and pleasure to sit with Metropolis Records recording artists Army of the Universe during their St. Louis stop as opening acts for the Birthday Massacre.  Let me say for the record that these are some of the nicest and funniest guys you’ll ever meet.  It was a real pleasure to hang with them for a bit.  Enjoy.  Also, check out their new 1999-The Remixes ep as well as their last 3 albums on Metropolis Records.  They have a very unique blend of ebm fused with rock and industrial sounds; an absolute bloody great band.

TNBtS:  This is your first time in St. Louis, right?

Lord K:  This is Albert (Trebla).  Albert can get this one.

Trebla:  What’s next?  As you said, the album which came out last year, actually.  Now we have the single remixes for “1999.”  We are working on more re-works and that’s happening right now…so talk about 2017, we will probably come out with the Facelift EP.  We basically re-worked our very first EP released on Metropolis ages ago so we re-worked every single song and we are almost ready with it, so that is our next release for the year.

TNBtS:  There are two songs that are on the album that are my favorites; one is “The Albert Hotel” and “Little Paranoia.”

TNBtS:  Both of those, there is a lot of emotion in there.  I was wondering if maybe you could give us a little insight on those two tracks because there seems to be with the lyrics sort of this contrast between looking inward and looking outward.

Trebla:  Ok, I can do The Albert Hotel, (looks to Lord K) You do Little Paranoia.

Lord K:  “Little Paranoia”…He (Trebla) started it.  He dedicated it to me cuz I’m a really anxious guy.  I get paranoid.  I get anxious.  I hate to travel.  Always when I travel, I get anxious and paranoid.  But that hour, that 40 minutes, 50 minutes we stay on stage, it pays you (for) all the pain of being away from home.  So I get this thing of Paranoia.

He wrote the song like in 2010.  Then we used this technique.  We recorded in a contrary way like starting from the vocals and then the acoustic guitar.  The guitar that you listen to, it’s an acoustic one really old Yamaha with strings that I have to change and I don’t change because I’m lazy.  But it’s got that sound that brought Little Paranoia into life.  Sometimes when I sing it, not always but often I get goosebumps because I really love these guys and there is something about us….something about putting yourself, wearing a mask, taking away that mask and putting yourself in front of everybody and facing your paranoia.  It’s like a phoenix.  You die every night.  You’re reborn every day. And that’s it.

Trebla:  The Albert Hotel is a slightly different story.  We always picture ourselves in this completely different world, completely detached from reality which normally resumes into Hell, our old hell.  We do not really refer to any religions.  We have this vision of this hotel where we ended up and check in… where are we now?  We don’t know.

Trebla:  We wrote this other song “Table in Hell” our first album, Mother Ignorance and The Albert Hotel is probably the follow-up

Lord K:  You said a rad thing…the contrast in the lyrics, what you said before the contrast, sometimes inwards, sometimes outwards.  There’s also a lot of irony in what we do.  But also sometimes that irony is outer irony of course.  Sometimes it’s serious.  Sometimes we are to play.  We don’t have to take ourselves too much seriously.

TNBtS:  So do you think that most of the stuff is written of personal experience…like what YOU’ve experienced?

TNBtS:  Or just observations from outside?

(sirens in the background)

Trebla:  What is going on?

TNBtS (to Lord K):  You also have a hard rock project.

Lord K:  2009 and we stopped in 2010.  Well, we started the thing more on the live scene.  It’s Kult of the Skull God.  We did an album.  It was a project.  Sometimes I wrote lyrics and ideas but it’s something really slow.  I don’t know if something will come up.  Maybe.  I wrote a song called “Slot Machine.”  It’s really weird.  Ok… if you want to listen.  It’s hard to explain because it’s a song about this guy playing a slot machine and he got mad doing cocaine while playing the slot machine.  He’s losing a lot of money then the police want something from him.  Then he goes back to his house.  He got all his house full of traps.  “Slot Machine.  Slot Machine.  Tell me baby do you know what I mean?”

TNBtS:  So I know you are based in Milan but you (Trebla) spend a lot of time in LA.

Trebla:  A LOT of time in Lost Angeles, yes.

TNBtS:  I read from interviews that there is a lot of file sharing…

TNBtS:  If we didn’t have that technology, how do you think that would have affected you guys getting together or doing what you do?

Trebla:  I think we would manage anyways.  Seems we really love what we do and I believe that if we could simply plan a little bit better our lives we could get together and write like a full album in one week.  We should probably take one week off, go somewhere and really write…maybe not one album in one week, but…

Lord K:  We could record like 4 songs in 3 hours…like Black Sabbath.

Trebla:  Yeah… the easy thing is that Dave owns a proper studio.  I can do all the writings and all the beats on my laptop and we don’t need to share files if we can meet more often and we can do that.  I mean, we would do that anyway,

Lord K:  Now everything is simplest.

Trebla:  Trust me.  I’m the one sharing files but I’m the first one to be an analog guy and I’m so nostalgic, man you have no idea.  Dave is actually a bit more updated.  But to answer your question, we would probably manage anyways just by meeting a little more often.

Trebla:  It is fair enough but if you think about the 90s, I was probably a little too young to experience the old 90s culture but if I look back… as I said, I’m an analog guy.  I was starting to DJ in the 90s and DJing meant vinyl only, the underground scene, the rave scene, industrial scene.  Everything was there. (look at video). It was when we used to go like this..(holds middle fingers up) and then something happened and people go like this…(makes heart symbol with fingers)

Trebla:  I mean I’m not saying that people should hate each other or love each other.  Everything got so f$%kin’ superficial after the year 2000 in terms of music producing, festivals…whatever.  It’s a long story.  But yeah, there’s a little nostalgia.  Dave…you can add something probably.

TNBtS:  The remix “Ninety Ninety Noise” how did you guys get that sound and how do you feel about the power electronics/noise movement and what’s that like where you are from?

Lord K:  I don’t know enough about that.

Trebla:  So, as I said, being a DJ and producer forever, it’s always fun to make a remix of our own songs.  In this case (inaudible name) very talented producer from Oklahoma City but lives in Brooklyn, New York.  And we just messed it up a little bit.  We got this very interesting groove, like a techno beat and the remix came out very organically.  It’s just fun.  It’s just pure fun.

TNBtS:  So there were a couple tracks that I saw on Discogs.com: one was “Take Control” and the other was “When the Sky Blacks Out.”  The only trace I saw of “Take Control” was on Youtube.  What’s the story behind these two tracks or where can people hear them if they want?

Trebla:  “Take Control” was just a soundtrack we made for Adidas and was meant not to be released.  It wasn’t meant to be like a public release…just a soundtrack for a commercial…for Milan AC (soccer).  Actually he (Lord K) supports Milan AC.  I support Inter Milan soccer.  I’m a hockey guy.

Trebla:  Are you a Blues fan?

Trebla:  “When the Sky Blacks Out” is a whole different story.  The truth is that we started that song and never finished it.  It’s still there, somewhere.  We will probably finish it like for a b-side project eventually.

TNBtS:  Here’s the big question.  30, 40 50 years from now, a distant relative from one of your families finds a box in an old house.  In that box, there’s an Army of the Universe discography and something to play it on.  What do you want them to know about what you did and your legacy?

Dave:  Maybe just some story about our tours if we can’t tell right now.

Trebla:  I say, depends who is opening the box.  Say it’s a small kid, it’s my grandson…He finds it,  “oh f$%k, my grandpa was crazy as f#$k.  He will have to understand why and the process to make music and to build up a band, something which should be inspiring to a young boy even though it might be a little scary in the beginning.  But he has to dig a bit more and see how we do it.

Of course if someone else opens the box like the cleaning lady, well then it’s a whole different story.

Lord K:  Heels, strippers coming out of the box

TNBtS:  So you’re adding stuff to the box.  I was just saying the CDs.  But it’s hey your box.

Lord K:  Skeletons…we got skeletons coming out of the box…a bottle of Jack Daniels maybe, of course.

Thanks guys for doing the interview.  Please come back to St. Louis soon!