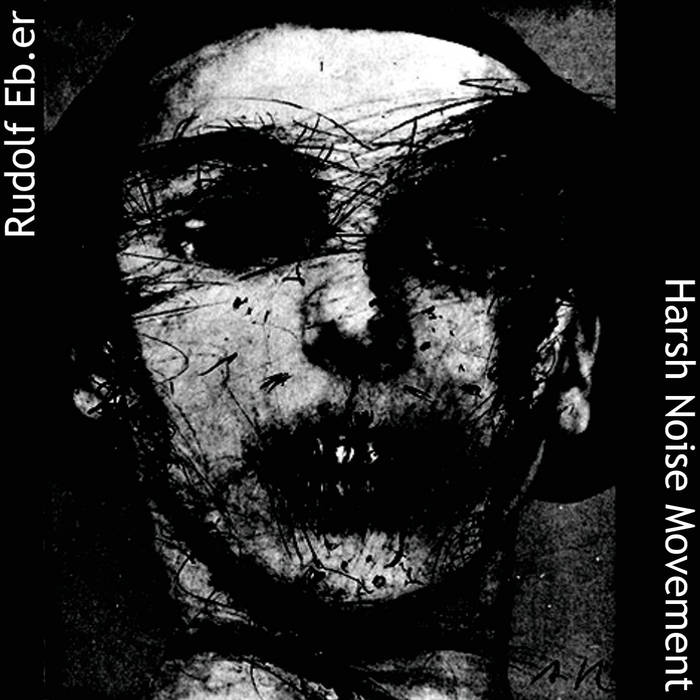 My apologies to the artists for not reviewing this split album sooner but it’s because of this release that I’ve suffered mental and auditory damage.

From the notorious artists Harsh Noise Movement and the King of Sonic Discomfort, Rudolf Eb.er-one of the most unique figures in noise and performance art, we bring you a split release on HNM Records.

HNM brings their trademark wall of noise sound but in this case they go from wall to nuclear ballistic with their track “Colostomy Bag Blues,” a track clocking in at over 26 minutes.  It almost sounds like beneath the layers of static and abrasion there are some deeper and buried sounds.  But perhaps that’s just the trauma inflicted by the Rudolf Eb.er tracks.  But we’ll address him in a moment.  “Colostomy Bag Blues” is likely to create the need for a colostomy bag.  There’s plenty of dynamics and levels of discomfort….low end and high frequencies, winds of static and distortion; some of the heaviest material on the market.

Regarding Rudolf Eb.er; The thing is, when you have heard or seen a Rudof Eb.er performance, it is impossible to un-hear or un-see it.  He’s a master of leaving marks on your brain and can use the minimal to create maximum discomfort whether it’s with frequencies, disturbing samples or whatever.  His mix draws you in and invites you to further mind-altering scenarios.  Take his track “Hirnsaft Madchen” for example.  If you are looking for a noise wall, you won’t find it.  What you will find, however, is a uniquely disturbing track with an uncomfortable ear-jarring noise and very disturbing voice samples buried beneath static. (one appearing to sing and the other… well, who knows).

The HNM/Rudolf Eb.er split release is available in two formats, ltd. edition(30 copies) CD and digital download.  I recommend it because it combines two artists who create harshness and discomfort in their own ways leaving different after-affects.  Either way, your brain isn’t the same after the listen.