Live Assault is a recording that is very special not just in and of itself artistically, but also because of the history of its creator, the Croatian dark ambient/ritual project TeHOM.

TeHOM is considered to be one of the first, if not THE first dark ambient project from Croatia.  TeHOM was started initially in the mid-90s by Sinisa Ocurscak, a philosophy professor, author and musician.  Mr. Ocurscak’s untimely passing came in 1997.

TeHoM was once again resurrected in 2011 by Sinisa’s long-time friend and musical partner in TeHOM, Miljenko Rajakovic.

After researching TeHOM’s history and hearing the magic that is Live Assault, it became clear that a simple review would be a virtual injustice to you, the reader, to Mr. Ocurscak and Mr. Rajakovic.  So we decided to turn straight to the artist.  This is an interview that was several weeks in the making so we are honored to bring it to you now.

Miljenko Rajakovic was kind enough to give some time to answer a few of our questions and we thank him for his time.

From Bandcamp, “Special LIVE audio recording of a unique TeHÔM performance for “The Keep Ambient Lodge” at 2016’s Brutal Assault Festival in the Czech Republic. Recorded both through the mixing board as well as from two room microphones to capture glimpses of the live experience. TeHÔM’s music recalls visions of ancient cultures, evoked by hypnotic, abstract and organic soundscapes wrapped in ritualistic and esoteric atmospheres from which a primordial flood of Chaos emerges.”

Why the decision to release a new album in live format at this time?

It was not intention from beginning, it was coming spontaneously. I got recordings from organisers of Keep Ambient Lodge stage @ Brutal Assault Festival where TeHÔM was playing in summer 2016, actually I didn’t know at all that they are recording something and I was surprised and happy. And we are restore recordings because was some clicks and cuts there on it. After that I deicide want this recordings on some live album and offer album first to Cyclic Law for CD and after that to La Esencia for LP vinyl picture disc version. Thanks to Frederic Arbour from Cyclic Law and David Garcia Carmona from La Esencia Records for that we’re done this album. I’m proud on it and TeHÔM first picture disc vinyl and vinyl at all..

The name is Live Assault… is this an assault on the human psyche or what?

Yeah, would be interprete like that, but mainly it is recordings from Brutal Assault Festival in Czech Republic and therefore is Live I name it “Live Assault”.

How much of the material on “Live Assault” was pre-planned and how much was improvisational?

I have in preset matrices of tracks, and I build and improvise on them voices and I make sounds with a tube instrument with whome I drill the sounds into compositions.. Tracks were slower than on album studio versions.. so that’s giving to live still more ritual repetitive approach..

Can you talk about some of the voice samples that are included in the recording and their meaning in the over-all work?

It is live improvisation of my own voice. So I make them directly on live tracks in time of performing. So, these are not samples, it’s my real voice what you hear on the recordings..  They mean that it is also a human touch in ritual approach of presenting live music.

Was it more important for you to create a sonic image or to create an atmosphere that evokes something far deeper and more psychological?

If you asking me for live aspects it was both important for me sonic image and of course psychological atmosphere to come in different ways to people and they think about they listen at that moment. But I create an atmosphere and all directly on stage, I never know what will happened and if will come deeper to the public and more psychological. Also important is place where live performance is making. Because this give to whole story that night special feeling.

Like what one guy said and it perfect describe what’s goin’ on when you listen TeHÔM music: “This is absolutely what I’d term interstellar ambient. It’s quite dark, so don’t worry but that is just one facet to what is going on. Close your eyes and you too like me, will find yourself becoming only an abstract construct burnished out of light and shadow. Faster and faster the revolutions spin us until they transcend their cyclic origins to become revelations. In order to break free from humanity’s monotony one has to first recognize that it is designed only to distract and neuter the mind, cast your eyes to the heavens and remember that all of this has happened before. We have been in this place time and time again, it is only through rejecting the prison of time’s keeping that we will ever move forward.” And that’s true, so close your eyes, relaxing, listening music and go to your best or worst pictures!

After  a long period following your friend and former band mate’s death, what was it that made you want to re-start music and especially resurrect TeHÔM?  I know you have stated in interviews that you were motivated to keep your friend’s memory alive.  But my question is…  were there any specific events that drove you to resurrect TeHÔM or was it just a motivation that had been building up?

Whole the time in period of 12 years silence from the 2nd album released 2000 until 2012 when 1st track after that appeared on Kalpamantra Records compilation I had in my mind that TeHOM project still have something to say and need to go up again.

The idea of bringing TeHÔM back to life stretches back to 2007 when I got up firstly with TeHÔM MySpace page and put the player with old songs. The whole time in my head was the idea of the project to continue. Siniša was my great friend of 10 years socializing ’88-97 with whom I hung out and worked extensively on the music and other project Principia Audiomatica with whom we released a CD album for the legendary Italian label Minus habens Records. The whole time I had a vision in my mind that this project should continue acting and music publishing, and even have a live audio-video presentation when the opportunity arises, because Siniša could not do it and would certainly have liked to continue and do. Among other things that I made for our friendship who are always happy to remember, and therefore Siniša’s spirit. Decision at no time was not only difficult what was difficult was remembering some bad moments of his illness. But the glory of this, and from all that came the new TeHÔM music that I’m proud and I’m sure it would be Siniša. I will always remember of his nice real friendship, his mystic personality, big passion for the music, his spirit, and until the end his strong fight against the illness.

Do you think that the vision of the project has changed or re-focused since you became the only member?

Everything’s changed from time he died, it is now 20 years ago in October. And actually nothing is the same, internet time, less sale of CD’s including digital music marketing, different channels and ways of selling and promoting your stuff, much more music projects, labels and all. So much things around what this makes all very different time.

I really wanted to offer a “new” and interesting ideas in the field of dark ritual ambient and experimental soundscapes, in the same vein as TeHÔM was and continuing on from where it stopped ’97 when Siniša died. Vision of the project is the same but with new level and approach to the music, new story and of course new labels for all that. I want people remember album(s) and some track in between thousands of others today. It is hard but I think and hope that I have some  success in that, and people like new stuff..

How important is ritual or the spiritual realm with regard to TeHOM?

I think is really important for the whole story behind TeHÔM and I want giving all the time prefix on that as well as the previous 2 older albums that had it. For example on live album and tracks I slow tracks little bit so people get still more feeling of ritual repetitive sound. New album will be still more directed to ritual ambient sound including tribal percussion and of course some spiritual healm behind all that.. That’s real TeHÔM.

What are the next plans for TeHOM?

New 4th studio album is in working process still some time, hopefully will be finished until middle of 2018 and released on Cyclic Law on CD & LP versions. Also a track at one russian limited edition CD compilation on Flecktarn Productions, etc. Also I have in plan maybe opening one new project for more deeper ambient stuff.. it is in preparation, we will see what future bring.  Some upcoming live appearances are also here, so first one is in Norway in Trondheim 18th November on event Blåsvart Aften Vol.9 together with italian New Risen Throne and norvegians Svartsinn, Tutfarangi and special guests Northaunt, Taphephobia. Other upcoming live gig will be probably on Hradby Samoty Festival in Czech Republic 28-30th June 2018 with many good projects like always there, TeHÔM waiting confirmation. And still few other possible gigs in 2018.

You receive a commission payment from the estate of Sinisa Očurščak to compose an original dark ambient piece to be played ONLY one time live and never heard again.  The purpose is to create a memorial tribute to your friend for this celebration of his life.

Talk about the process you would use to accomplish this…. example; what sounds you’d use, where you would go to work or reflect.. whatever else.

Creating music is repetitive and time-consuming process, your head of all these sounds is slowly in a state of hypnosis, but I love this state. I used to listen to one and the same repetitive ritualistic ambient sound for hours until I come up with ideas for TeHÔM proposal for a song or part of a song. A creation or collecting of sounds or rhythms occur in all sorts of ways. For example I watch a movie and my brain works so that when I hear some good sound or rhythm immediately put it into the context of the song and remember where’s and edit and completely change it to my taste for the style of music that I prefer and I do. I use to making my own sounds. Also making my own rhythms sometimes from moview sometimes from 2-3 sounds in one.. In last time I try to use some sounds which are not on these CD’s and DVD’s with sound collections.. is better you have your own collection and you can manipulate with them.. .

Many, many years from now…a very distant relative locates a box in an old attic.  In that box they find a copy of “Live Assault” and something to play it on.  What do you want them to know about that night and about the legacy of TeHÔM even just from only listening to the album?

I want that they feel whole atmosphere around this TeHÔM story and that night at all. Not only dark side of this recordings than also look at the future through this music.  I think they can hear a lot of things through this stuff..  And usually everyone is listening to something else in it and it is good to have their own personal interpretation. 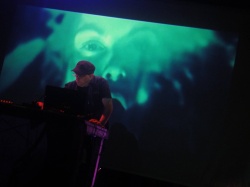