It’s been a real pleasure working labels that have displayed so much pride in how their work is presented.  Reverse Records in the UK is one of those very few.

Kafkaesque II is the new release by one of their artists, Inhibition; the project of Reverse’s Keith Mitchell.  Whereas White Walls is more geared toward harsh noise, Inhibition seems more interested in noisy drone/death industrial with its creepy foot in a noise bath.  The album features three pieces, “Aktion I, II & III” which collectively bring it to just over 27 minutes in length.

One of the things that I LOVE that the Reverse artists often do is their incorporation of some of the more disturbing samples you’ll ever hear.  I think this is an often over-looked opportunity for some noise & death industrial artists; that is, that samples add another dynamic to the work.  “Aktion I” begins with a creepy sample of what sounds like kids along with some looming high-frequency feedback hanging like a screwed-up halo and some heavy string hits.  Disturbance and discomfort are at its peak here with the discordant mixture of samples, noise ebbing and flowing and drawn-out drone noise.  The piece becomes more abrasive and uncomfortable oddly enough when the noise drops out at around 5:30 leaving just the kids’ sample only to increase equally abruptly shortly thereafter with some think noisy rumbling.

In “Aktion II,” the track starts out with the sample at the forefront over a minimal low frequency.  Effect-laden static is mixed in like a marginally-received TV station.  The noise becomes increasingly erratic and buries the sample but leaves the listener with a real feeling of unease.  Great stuff….  Another disturbing atmosphere appears in “Aktion III” with a number of things going on including some samples and some low-end drone noises which come and go.  Like the other pieces, this one grows more intense with the inclusion of what sounds like thunder and more found objects.  Some heightened repetitive low-end frequency carries us disturbed listeners to the end.

It’s been a great day to review noise from a couple of artists and labels who are unafraid to push boundaries between noise, death industrial and ambient/drone.  Reverse is one of the best out there right now especially when you consider how well they present their work.

Kafkaesque II is available now via Reverse Records.  This is a professionally produced CD-R which is signed by the artist.  The release features photography by Nana RapeBlossom and spoken word/vox effects by Jennifer M. Lubert. 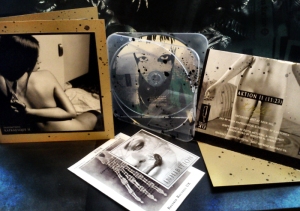