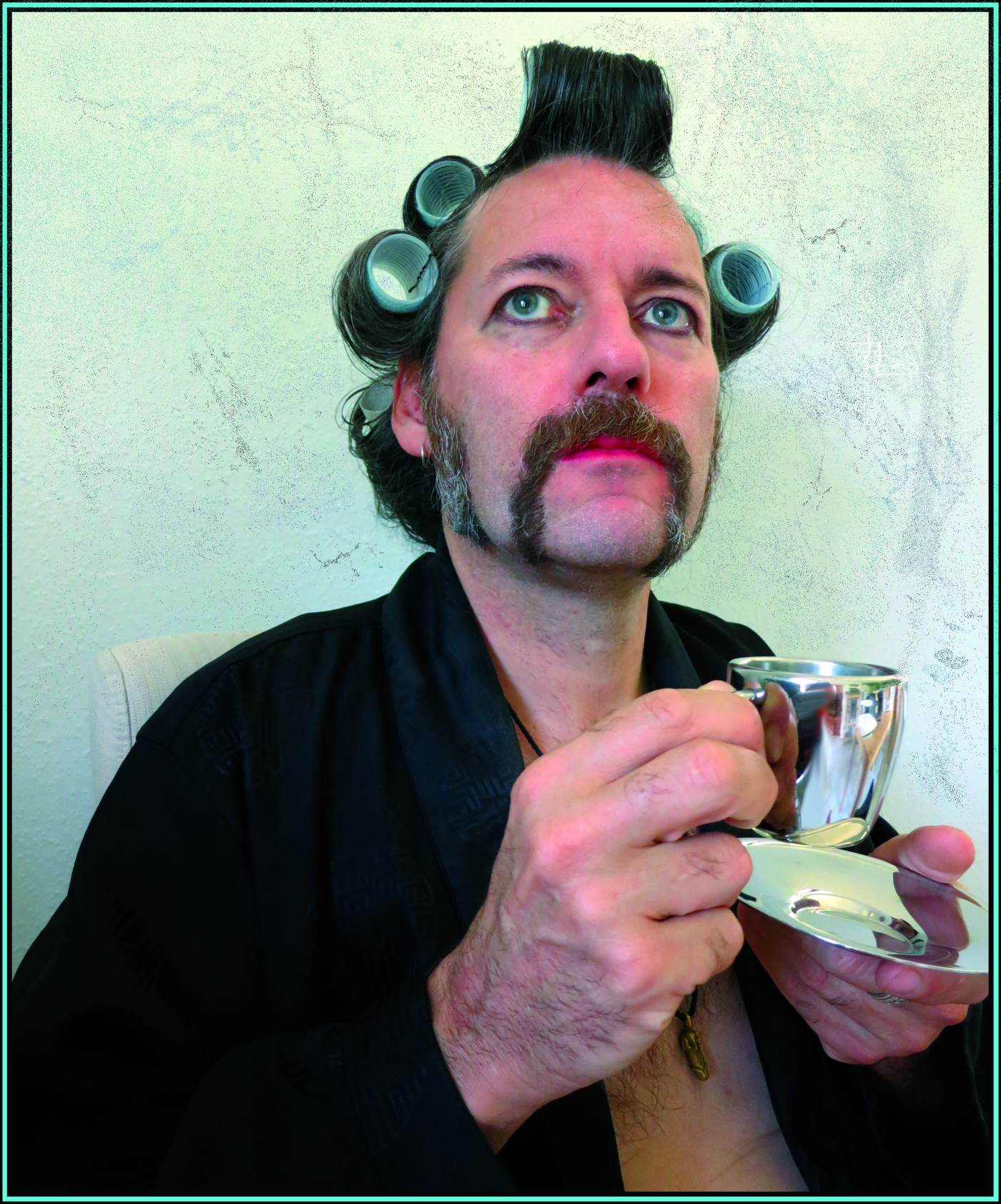 Der Blutharsch is a band that really needs no introduction.  As ironic as it is, they’ve

become legends in the neo-folk/martial arena; ironic because their depth and diversity have over-stretched the boundaries of those “genres” many times over.  Albin Julius has led the Der Blutharsch charge and was kind enough to spend some time answering our questions.

Desire is the new album due out shortly and will be available on mCD, 12″ vinyl and digital download.

You have a brand new album coming out just shortly called “Desire;” a collaboration with White Hills.  Can you tell the readers more about the release and how the split came about?  Was this a studio collaboration or did you create through the internet?

We and White Hills have been friends since many years and we already did a collaboration (7inch EP – Today I want to catch Clouds 7 years ago) – and as over the years it felt that we would like to work together again we just started recording desire.
The album is not a split – we do now only collaborations with bands as we want to melt our music with theirs and its much more interesting to work on/with other peoples music.  Desire has been recorded partly in NYC at White Hills studio and party at “temple 451” in the Vienna Woods.

For the readers, could you give them an idea of how stylistically and philosophically “Desire” differs from its predecessor “What Makes You Pray?”

Well, stylistically it of course differs a lot from “What Makes you pray” as we recorded both together and its more “sleazy” and kinky in my ears although it has a dark vibe too.  Don`t really know and actually, to be honest I also do not think nor want to think that much about what we do – we just work on our projects without any deeper concept – its the music what counts for me and then normally Marthynna takes care on the vocals/topics etc – so thematically you should talk to her. But as her lyrics are very personal all the time and she doesn`t want to talk about this but leave interpretation to the listener…I only can tell its about – well – Desire…=)

Your sound has sort of developed into more of a psychedelic rock vibe.  What do you attribute this development to?

Time – life – whatever.. I think its natural that you develop as a person or an so called “artist” …. if not..it would be poor also for yourself to always repeat yourself.
I am doing music because I want to explore new territories and this seems only to be the result. But well… as I said.. the way is the destiny and we keep it exciting, or at least – try.

differences or is it otherwise?

Sure… every day is an influence – be it travelling, experiencing new things or just visiting an exhibition or even a concert of another band.
But travelling for us is very important – personally and emotionally.. its recharging the batteries – heaving a break from our usual surrounding etc. – also I like to include parts of my experiences into the music..be it musically vice – by bringing some field recordings, new instruments from abroad or just some artwork. Its part of my life so it for sure is part of my / our music.

Your early work with Der Blutharsch was very much associated with the Martial Neofolk movement.  Many of these artists were often associated with a European Nationalist vision.  Is this something that you embraced as well or did you make a conscious or natural move away from that stigma?

I never felt part of this movement really and I NEVER understood why people labeled us as Neofolk. Actually I think neofolk was one of the poorest musical movements – looking back. Of course there were a very few bands which were ok – but if you consider their music with real folk or with some old American folk music… you notice how poor this all was. Without a dangerous “image” which kept people feeling dangerous and/or special or so called “elite” – I think this movement would never had caused the interest it did.
I have no clue but I think Neofolk is dead these days – isnt it?  – and I think its not a big loss. If I want to listen good folk music I listen to some Irish or Californian folk bands form the 60ies and do not have to listen someone moaning about Europe etc.

Some artists in the neofolk/martial areas have been met with controversy to the point where there were threats or protesters.   Now it’s time for Der Blutharsch Fact of Fiction.  I was wondering if perhaps you’d mind commenting on the passage below.  Additionally, have there been any misconceptions that have come with other controversy with Der Blutharsch?

Well..obviously. Some people never could get the difference between stage and life – show and concept etc. Actually I never did care – which might have caused more problems than to explain us – but I think you never should explain yourself or what you do. If people don`t get it – fuck them! I didn`t care then and I do not care now.. I myself know who I am and what I belief in and people who know me might know as well..for all the others: “I do not care about you nor what you think!” – so…

Some of the early albums, especially the first two had some fairly interesting samples.  From where was the source material of some of these and were they selected to fit into the context of your idea or were they inserted purely for the effect?

The first 2 albums were very much inspired by the history of Europe in the late 20ies and early 30ies..so i took some samples from this time – such as Lenin, Russian, Italian avant-garde music or even German military music… all to fit them together to a weird Kaleidoscope.

Why did you make the decision early in your career to make many of the albums with tracks, “Untitled?”

I never did really see an album as collection of tracks but more as one piece. Still I think these days – with the newer stuff you shouldn’t listen juts tracks but enjoy our album as one whole piece of music. Also I didn`t really want to put the attraction of the listener away from their own interpretation and also as the first 2 album were mostly instrumental – honestly I didn`t want to think about some stupid boring titles just to have some.

Around 2010/2011 you changed Der Blutharsch to add The Infinite Church of the Leading Hand.  Why this decision and could you explain the meaning behind the new name?

The decision as just part of he history.. back then I thought that DB had changed quit a lot – both in music as well as in image that it would be time for a step. But I didnt want to end it or to rename it as still it was part of our DNA and I did not want to bury it completely. The name actually goes back on an internal joke on the tour we played then and this joke just ended up into renaming the little bastard.

For those who might be interested in your live shows… you have had a very diverse history.  How do you pick your live set and are there any eras of your career which you always exclude?  Also, is your live line-up based upon the direction of what you want to select to play or are the tracks re-worked to fit the roles of the live band?

Actually we also play very old stuff in our live set – but we always rework the songs – old or new for life and make them quit different – which brings us more joy of course – only reproducing music would be boring so we always try out something new. Also you have to consider the difference of us in the studio – having much more technical options and a different workflow – and playing life and to have to reduce the sound onto 5 people playing life. But that’s the part of the fun and we all like the fact that DBaticotlh studio is another sound than life.

When you are constructing the live set which obviously include some older “Untitled” tracks…. how do you return to them for reference or keep track of things?  Surely this allows you to focus solely on the music without interruption of context?

Well..of coarse we have some internal “working titles” – would otherwise really fuck up the workflow.  Actually I think we play one song from the second or third album – but of coarse its transferred in a quit doomish version at the moment.

Loads ‘o plans. At the moment we are recording on our new album and a collaboration album with French band Mhönos – which we like a lot. Then I am also recording a new album with Jastreb (the band of Niko – Seven that Spells where I do the synth stuff) later this year.

We work on 2 collaborations as well with the guy of Tervahäät and the singer of Horna ( the fInnish BM band) as well as with Göteborgs Trepaneringsritualen.

Also we will play a show in Abtenau at “House of the H9ly” festival – the best festival in the world (we attend there annually as guests) – we will do a specials et for this – and then maybe one or 2 one offs in autumn. For 2019 we have a full tour planned.

But lets see what happens till then.

You’ve been offered a massive commission payment.  Here are the terms of the deal.  You travel to any area of the globe that you have never been to but would like to see.  You are to compose and perform an album based upon this area of geography or historic landmark.  You can bring instruments with you but you music also make use of some indigenous to the area.  Where do you go, What instruments do bring and how do you proceed on composing and performing this work?

I would go there without anything…. then just pick up some locals from the street who can hold an instrument and see what happens… maybe we would come out with something..but if now I would waste all the money for food and drinks and a good time and then fuck about it!

But actually I think it would be – fun. BIG fun! – depending on which country they send us to.

Many many years from now, a very distant relative locates a box in the attic of an old house.  The box is labeled “Der Blutharsch.”  Inside they find a compilation of your work and something to play it on.  What do you hope this person learns of your legacy simply from listening to your music?

I actually do not care. I try to have a good time – enjoy life, have fun and what people think about me now or then..I really do NOT care!